We've become a society preoccupied with body weight and physical image, and this is acutely reflected in the fact that nearly every fast food chain has added low-carbohydrate choices to their regular menu. Is this just a trend, or has obesity reached epidemic proportions in our country? Between over the counter drugs, fad diets, twelve-step programs, diet and weight control programs and extreme measures such as painful (and dangerous) surgical procedures to dramatically reduce stomach size, we're apparently trying to manage an issue that has gotten way out of hand!

Overeating isn't generally considered an "Eating Disorder" because we don't think of it as life-threatening, and yet many die from eating-related illness. Heart attacks, strokes, diabetes and ruptured hiatal valves (leading to acid reflux disease, and cancer of the esophagus) are all symptoms associated with excess food consumption. In short, compulsive overeating poses a far more prevalent threat to our health than Anorexia Nervosa (starving oneself due to distorted body image) or Bulimia (purging/regurgitating food after eating to control body weight).

As with so many health issues, we seem focused on treating the symptom, instead of the cause of the problem--and eating disorders always have an emotional basis. Basically, it's not really about what you're eating, it's about what's eating you! Addictive/compulsive issues are symptomatic of psychic and emotional difficulties in childhood. It may be simpler to understand the food addict's inability to regulate their consumption, if you think of him/her trying to fill an inner void or wound, that's never had opportunity to heal.

I struggled with my own weight issue for many years--so I'm not just talking the talk, I'm walking it (scroll to the bottom of this page, for a photo). You'll have the benefit of my personal experience, plus some very simple tools for dropping the pounds, if you really want to surmount this problem.

Addictions are not inherited--but depression sure is. Core issues like shame (feelings and beliefs surrounding unworthiness, unlovability) that drove your parent to self-medicate with food, drugs, alcohol, sex, shopping, over-work, gambling, etc., to manage his/her internal pain, were passed onto you! Their parenting skills were limited in terms of giving attention, affection, praise, support and guidance, just as their parents were limited in supplying these crucial elements to them: We learn to love ourselves and others, by how we were loved as children.

Eating compulsions begin extremely early. Many of us became orally fixated during infancy and early childhood, when our mothers wanted to quiet us. If we were sad, tired or cranky, she stuck a pacifier/bottle, lollipop or cookie in our mouth, instead of attending to our need for comfort or closeness, which may have been less convenient for her to offer. Thus, we were programmed to anticipate that each time we experienced uncomfortable/difficult feelings, we should eat--and began associating food with soothing or distraction, that would make everything seem better!

Having been conditioned to expect a reward (usually something sweet) every time we abandoned certain emotions, kept us from learning how to tolerate those feelings, and self-soothe in healthier ways! Before long, we stopped living with a full range of emotions, because when they weren't adequately responded to, we experienced frustration and despair. Given that virtually all difficult sensations were gotten rid of (with food) during our first five or formative years, we've continued this pattern as we grew to adulthood. Without opportunities to experience and accommodate various types of feelings, and no capacity to comfort ourselves when we need emotional rebalancing, we're trapped in a perpetual love/hate relationship with food.

Food conditioning in childhood, implants the belief that certain feelings are unacceptable/bad, and that we're "bad" for having them!

Food/feeling issues have forced many of us to adopt narrowly defined self-images and become 'People Pleasers,' which can be hazardess to our health, and even be deadly! When we demand of ourselves only nice, positive, light, generous and "right" feelings, because we've been taught that other feelings are bad and wrong, the only sensation that can exist inside us, is emptiness.

I've assisted people who (initially) felt suicidal, yet were unable to recognize that they were depressed, because depression was considered an 'unacceptable' emotion they weren't allowed to have in childhood! Some have wanted to kill themselves, because they were unable to access lighter feeling states, and harshly judged themselves for this. Hence, not only were they in tremendous psychic/emotional pain, they compounded their trauma by making themselves "wrong" for it. The upshot? Because certain emotions had virtually been amputated out of their personality structure since infancy, many have gone through life as half-feeling individuals--and it's far easier to consider killing off half-a-self than a whole one!

Living with a variety of emotions is a very natural and normal part of being human. Addiction of any type, is driven by the need to flee darker feelings of anger, sadness, emptiness, lust, envy, shame, etc., that might be judged by others (or ourselves) as "negative." The compulsion to eat is related to swallowing or shoving-down these uncomfortable feelings! Since emotional sensations have been dulled over the course of many years, physical ones have too! This is evidenced by the food addict's inability to discern when he/she has eaten enough, to where hunger or a specific appetite is sated.

Compulsive overeating is a covert addiction like all others; we're most likely to engage in it during quiet/alone times, when self-deprecating thoughts or feelings from early psychic trauma begin to emerge. Even elaborate planning that goes into thinking about our next meal (or two or three) is an obsessive activity that distracts us from whatever material is trying to surface, and make its way to our conscious minds in order to be dealt with and resolved.

Obesity is a symptom of 'dis-ease' that's connected to deeper concerns, and might be thought of as Walking Depression. Overweight people have told me they're "never depressed," and this may be true for you--but try giving up the foods you normally eat for several days, and try to stop yourself from automatically reaching for a snack when your stomach's not truly empty. If you're willing to experiment with this, I'm sure you'll notice the emergence of some fairly uncomfortable (but authentic) feelings.

I view excess weight as body armor. In a metaphorical sense, extra padding or insulation doesn't let another get "too close." Subconsciously, we might need to maintain it, especially if we've survived incest or sexual molestation during childhood (whether we're able to recall that trauma, or not). While body armor can help us feel physically/emotionally safer in relationships, it may also provide convenient justification for somebody leaving us! If we can blame being rejected/abandoned on our weight, we never have to explore why/how we've come to regard ourselves as unworthy or unlovable--which is the core of compulsive, self-sabotaging behaviors.

Many years ago, I crafted and sent a very direct and explanatory letter to Maury Povich, about his shows with 'fat girls.' I tried to educate him about how injurious it was for him to be hugging and touching these females on national television, because they'd acquired their physical insulation to mitigate unwanted physical attention and advances from men! I stated that it was impossible for these females to ward off uncomfortable physical gestures from a man with celebrity status, while the entire world was watching. I never received acknowledgment of that letter, but those obesity shows he seemed fond of producing immediately and permanently ceased~ and that was good enough for Me!

Overeating can serve to avert our concerns (and complaints) about a close relationship. When we're feeling disempowered because of poor body image, we'll be less inclined to be conscious or critical about elements that trouble us in a partner: "If I feel bad about Me, I'll feel more grateful to You, for sticking around."  Shoving our feelings down, helps us avoid making choices or changes that could empower us--but threaten our established attachment(s).

Sugary and/or starchy foods are usually craved when we're feeling anxious, upset or depressed. A series of chemical changes occur in brain tissue when we consume carbohydrate-rich foods, which ultimately leads to an increase in serotonin. This chemical produces calming and soothing we seek in times of emotional distress--and since foods that help our brains produce it are readily available, bingeing impulses become reinforced. Serotonin is the key ingredient in some types of antidepressants designed to help us maintain sufficient levels of it. SSRI's (Selective Serotonin Re-uptake Inhibitors) can curb tendencies to crave and overeat foods known to raise brain serotonin, and weight loss can be facilitated by balancing neurochemistry. Once brain chemistry is normalized, we're able to approach challenging situations more effectively, because we aren't overwhelmed or immobilized by feelings that would formerly have prompted compulsivity! Think of it this way; if you could take a tablet that would help you feel and function considerably better and more efficiently than consuming a box of donuts, which would you choose?

Overeating is not a behavioral issue--it's a feeling one. You can literally try every diet and exercise program that's ever been invented (I certainly did), and continue to watch your body weight fluctuate with each new effort and ultimate failure. As a former compulsive eater, I'm intimately aware of your struggle. Throughout the course of my personal healing, I was determined to invent tools that allowed me to eat what I wanted "like a skinny person," lose my weight, and keep it off. The unique methods I discovered are shared with you in a couple of my YouTube videos about proper food combining. One thing's for certain; whether you believe it or not--there's real hope for putting an end to this torment once and for all. It's not your fault that you've had to live with this obstacle, and Healing means you'll never have to struggle with a "weight problem" again. 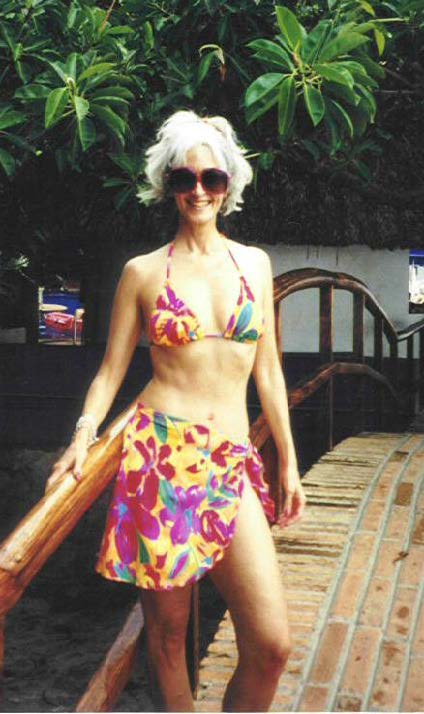 Shari Schreiber in late forties @ 5'9" and 122 lbs. I'm even thinner now, 20 years later. If you're seeking assistance with this issue, or your group/organization would like me to speak on this topic, feel free to contact me. I've taken food combining to a whole new level, and can teach you a few simple principles on having your cake, and eating it too! Are you planning a cruise--but afraid you can't resist those tempting goodies at the buffet table? You won't have to, and we'll get you back home, even skinnier than when you left for your vacation!

If you use an I-phone or an Apple PC, this app will let you hear my articles; http://itunes.apple.com/us/app/web-reader-text-to-speech/id320808874?mt=8

Are you finding this information helpful? Might you consider making a donation to keep this material available online for others who can benefit from it as you have? Your generosity is greatly appreciated. Thanks very much!

Thank you for your GENEROSITY!

After clicking on the donation button below, please enter the amount you'd like to donate into the price field.